The Pocket Book Of DEATH

The Pocket Book Of DEATH

Last summer I was going through a bookstore and found that in one of the books, they did a little section on 2pac, under the Celebrity Deaths chapter. Heres how it goes:

- On September 7, 1996, Tupac was struck by 4 bullets in a drive-by shooting in Las Vegas after attending a Mike Tyson boxing match. Tupac was riding in the passenger seat of a car being driven by Marrion "Suge" Knight.

-He was taken to a local hospital where he underwent two operations-one which required putting him in a medically-induced coma to remove his right lung.

-He died September 13, 1996 from respiratory failure and cardiopulmonary arrest.

-No one was ever convicted for Tupac's murder. His entourage who witnessed the murder wouldn't talk, and despite the presence of other cars and people on the animated Las Vegas street, no one saw a thing. Or at least wouldn't admit it.

-So who killed Tupac? He and his entourage had gotten into a scuffle with a Crips gang member outside the MGM hotel earlier that night. Was it gang retaliation? Others speculate that Suge Knight was the real target or that Suge himself had arranged for Tupac's Murder. Still, others claim that Biggie Smalls, the Notorious B.I.G.,had given the order to take out Shakur.

Is He Still Alive?

-He was pronounced dead on Friday the 13th. A bit suspect...

-He supposedly always wore a bullet-proof vest, but he wasn't wearing one that night. Hmmm...

-No one was ever convicted for the murder, and the elusive white Cadillac containing the supposed assailants were never found.

-Biggie Smalls ended up being murdered in a bizarrely similar fashion on March 9 1997. And surprise, surprise...his killer was also never found.

-Tupac had confessed shortly before his death that he wanted to leave the gangsta rap world...was faking his death the only way out?

Our Conclusion: In a two-year period, Tupac had been hit by a total of 9 bullets...a lot to live through even for a 25-year-old. Plus his astrological sign was Gemini. If he were alive, there's no way he could have kept quiet for this long. We think Tupac has been in negotiations with the big guy upstairs to improve angel-saint relations and to stop the ban on playing the harp after 10 pm.


Also, the book gave Pac's death a one on the fishiness scale, meaning - Something smells slightly fishy, but it's probably just the tuna fish sandwich you made last night. 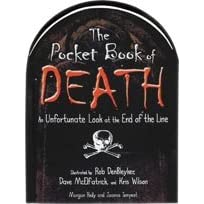 The book didn't really choose the best alive proof, but at least they mentioned him.
Makavelilives*

Re: The Pocket Book Of DEATH

Nice bro! Common but still good. Never knew anything like this was published in books with other celebrities.
It was reported he had a 50-50 chance of making it and some news reporter said "He is expected to once again, recover from his injuries"
Current date/time is Thu Jun 04, 2020 4:29 am